This one will be easier to understand, I am too tired to be cryptic, and I’ve put a few photos on the blog site. You know a picture paints a thousand words, and all that!

It had been a toss-up between surf and ski, but given all the cold weather we’ve had, it wasn’t a difficult choice.

So I’m back from Ibiza, and I used Ryanair €17. Don’t know what I was moaning about, sadly Stansted isn’t exactly on my doorstep. The worst part of the journey was the one hour and fifteen minutes it took to get through border control this end!

Anyway, I got the job done. Shoes were collected, tattooing underway, fitting done, and now I can sleep soundly, probably for a week after Sunday’s villa party.

The villa was like all villas in Ibiza, at the end of a very long gravel track. It had started to rain when we arrived, and when we left at 5.30 am it was still raining, but this is Ibiza where nothing stops a good party and it was a very good party.

Eugene went out to take some air, and whilst wandering round the garden managed to disconnect the power supply, and all the lights went out at Pacha, 10 miles away! Neil managed to lose his special red bandana (towel) that was wrapped round his head, and me? Well, I was wandering sideways like a crab. I would insert a photo here, but at this point we were a little too far gone.

A big thank you to the guy who drove us home, it was one of the random acts of kindness. OK, it involved a long walk down another gravel track in search of a car, but we got there in the end.

Once home, Neil went to sleep on the sofa, Ina went to bed, and Eugene and I climbed up to roof terrace to watch the sun come up (it had stopped raining), and to drink a little more! Here is a photo of Eugene emulating Icarus. I ended up going to sleep at 8am. 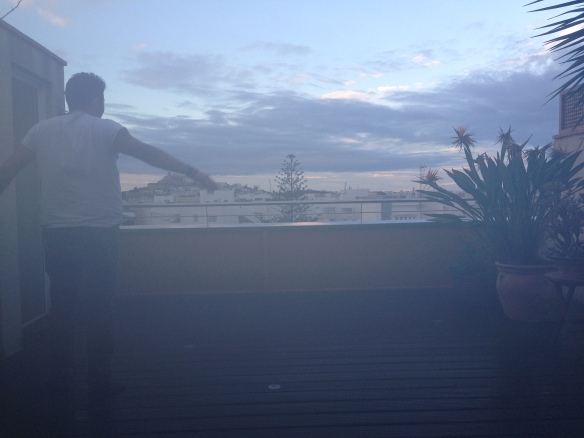 But we were up fresh as daisies at midday to go for lunch, and off we headed to Cala Jondal for a bite on the beach. The sun came out; it warmed up, 22C and a bit of a breeze. Jealous, I would be!

Scratch joined up with us for dinner, she’d sensibly slept through the rest of the partying. Just as well, she might have found the pool at the villa a little too tempting!

You may think that suddenly I’m posting loads of photos of my exploits on the blog site. Let me remind you it is mine and I can do what I want.

So I will leave you with one last photo, which to me encapsulates (I did spell check it), Ibiza and that amongst all the mayhem, some beauty remains. Since I was last there some restaurants have closed, some more clubs have opened, but the essence of the island remains. You just need to get away from the hustle and bustle. 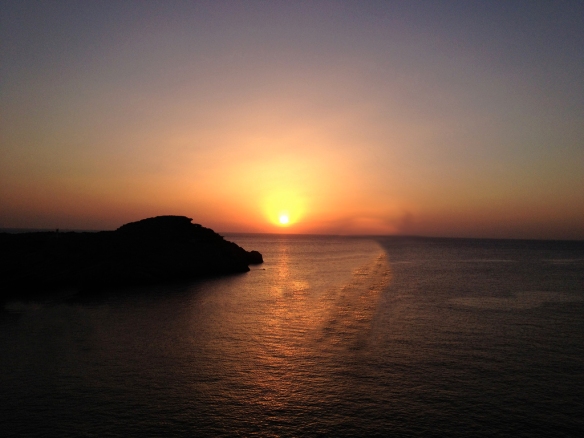 And I will leave you with one last thought. If certain substances are your flavour, be warned, a friend of mine who has a house in the centre of Ibiza saw a local person scraping white paint off a wall with a car key, not everything is what it seems! Do you think it would get you plastered?